Board of Education & Governance

School District 46 is governed by a seven member Board of School Trustees elected by the public every four years. The Board sets policies and directions for the operation of the district and its schools. As a result of the October 2022 municipal election, one new trustees, Ann Skelcher, joined six returning trustees; Amanda Amaral, Maria Hampvent, Sue Girard, Samantha Haines, Stacia Leech, and Pammila Ruth, to form the Board of Education of School District 46 – Sunshine Coast.

The current board was sworn in at a ceremony on Tuesday, November 8, 2022 at the School Board Office and trustees will remain in office until October 2028.

The general public  are encouraged to attend regular school board meetings held at the School Board Office located at 494 South Fletcher Road in Gibsons. The board’s meeting schedule, include agenda packages and minutes of previous meetings, can be found here.

The entire board can be reached by email to trustees@sd46.bc.ca. 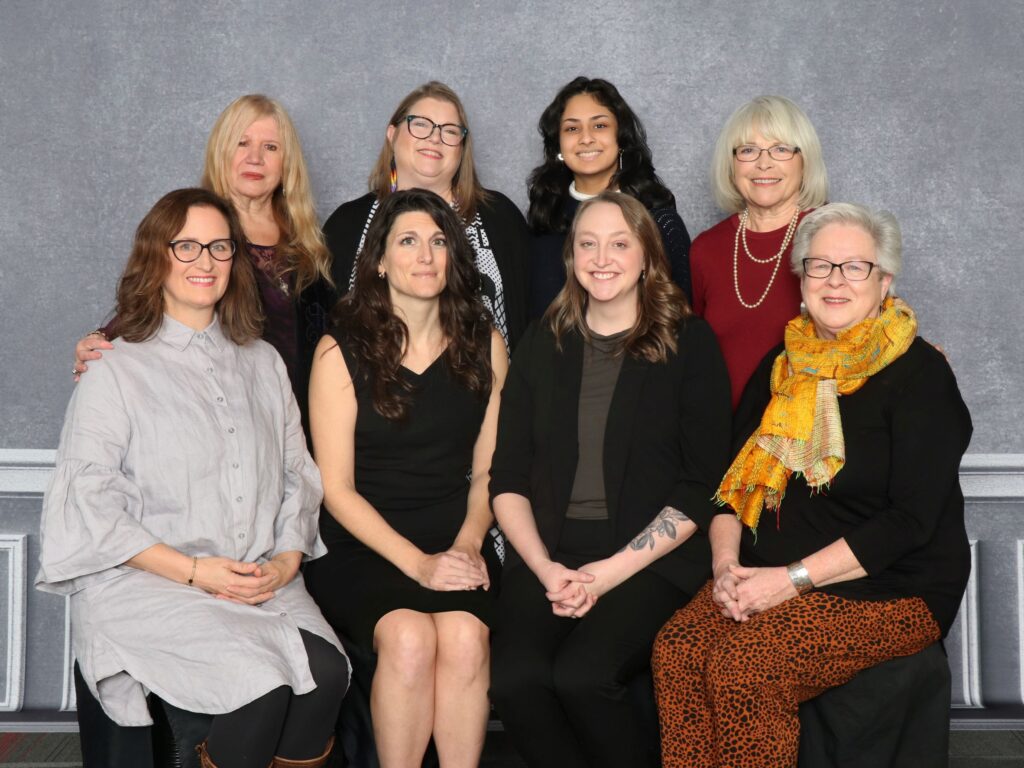 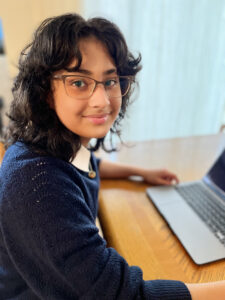 “I attended West Sechelt Elementary School and I am currently in Grade 12 at Elphinstone Secondary School. I hope to apply to university to study Life Sciences and eventually build a career in this dynamic field. I have a passion for creative writing, playing the alto saxophone, painting and digital art. I also love many sports, especially playing volleyball. I have been a Girl Guide since 2015 and enjoy working to make a difference in the community.

Having the opportunity to listen to students from throughout the district and communicate their opinions, ideas and concerns is truly a privilege. I will work hard to find creative ways to engage and reach out to students, so they can have a platform to be understood and included. I believe that the student voice is influential and can lead to concrete actions and changes in their learning experience. I know this will be an exciting role and I look forward to meeting, working and having fun with incredible people along the way!”

The board is very excited to welcome Student Trustee Achee to the board table for the 2022-23 school year. 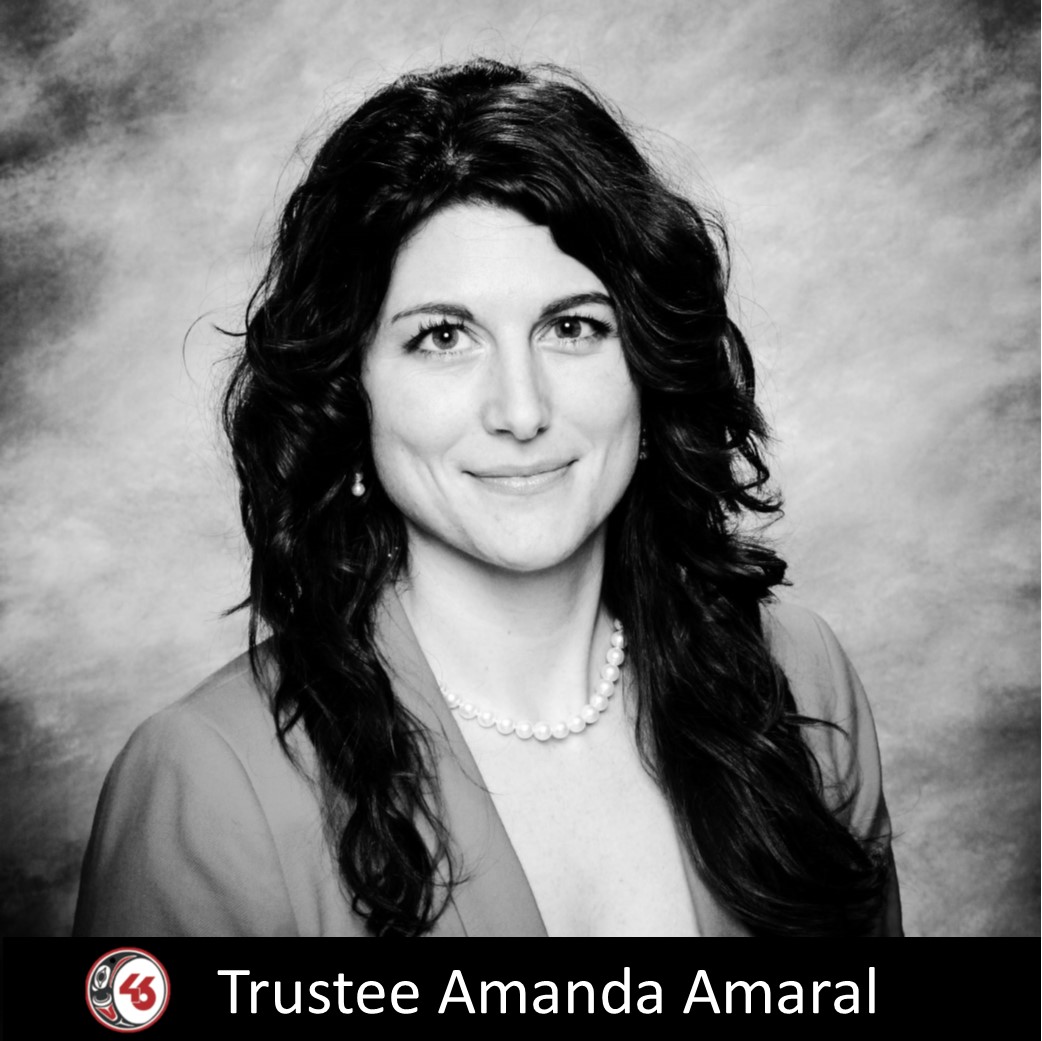 Amanda Amaral was born and raised on the Sunshine Coast. She is a proud graduate of SD46’s Alternative School.

Amanda is focused on continuing the school district’s reputation of excellence in student achievement by supporting environmental sustainability and climate action, meaningful inclusion for staff, students and families that identify as 2SLGBTQ+, continuing to journey together towards Truth and Reconciliation with the Skwxwú7mesh Úxwumixw and the shíshálh Nation and working to ensure equity in education through addressing socio-economic barriers to success. 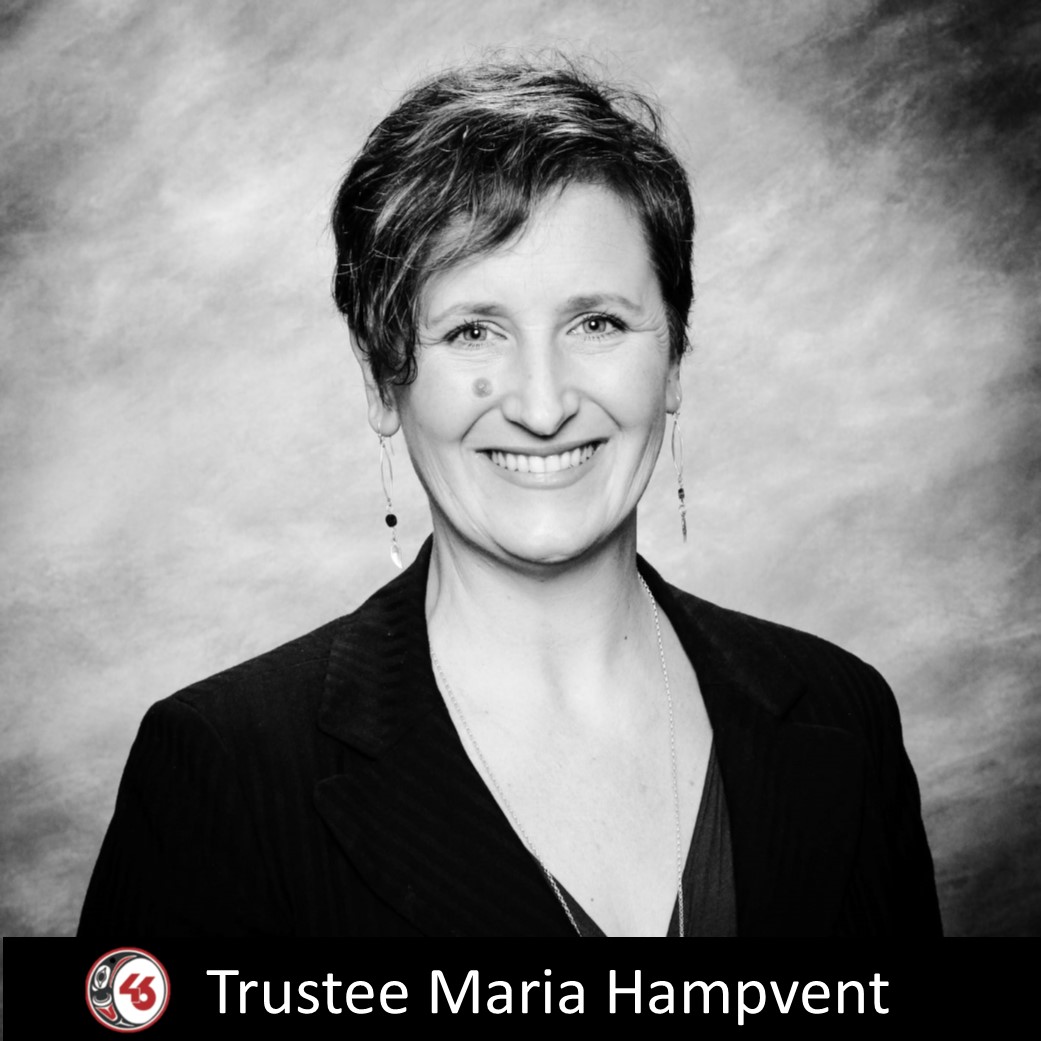 Maria Hampvent is an Internationally Certified Somatic Leadership & Emotional Intelligence Coach, formerly an Associate Executive Financial Advisor. She facilitates leadership and corporate training in Organizational Culture Change, Emotional Intelligence and Self Growth. She graduated with a Masters in 2018 with joint Foci: Values-Based Leadership and Sustainable Community Development. Prior to serving on SD46 (as BCSTA, BCPSEA and Vice Chair) she served our community as Vice Chair of SCREDO, volunteering with Syiyaya Reconciliation Movement & Restorative Justice. Maria enjoys coaching her four kids in multiple sports and she is most often found on the sidelines on weekends cheering for Sunshine Coast Youth. 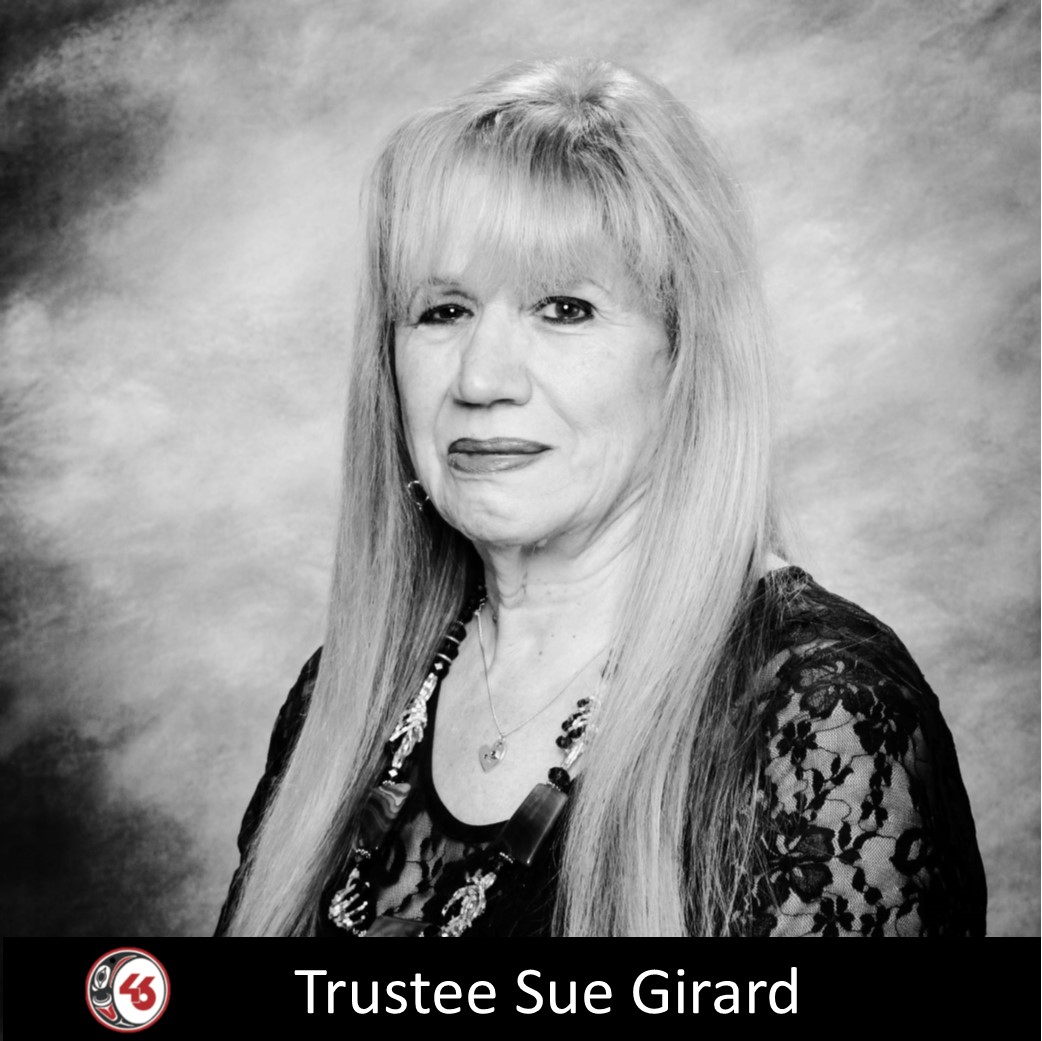 Sue moved to the Sunshine Coast when she was 14 and graduated from Elphinstone Secondary School. She left the coast for a while but returned in the early ‘80’s and raised her 3 children here. Sue took an active role in the early education of her children and was involved in the Jack and Jill Preschool where she spent 4 years as a class representative, vice-president and then president.

Sue studied to be a Special Education Teacher’s Assistant (SETA) at night school in School District #46. After which, Sue began work at the Sunshine Coast Association for Community Living where she continued her education while working in the areas of life skills development, supported employment services, and early management.

Sue graduated with Highest Honours in Child Psychology, with a specialty in brief solution focused therapy. Sue studied Addictions and Family Systems at Douglas College, with extensive training in dual and multiple disorders, and became the Executive Director at Sunshine Coast Breakaway Youth and Family Services, where she developed programs for the growing needs of local youth and their families.

Sue taught many workshops, seminars and took part in ongoing classroom education sessions in School District #46. She was an addictions counsellor and educator with the alternative education program for many years. Sue was a founding member and the coordinator of Restorative Justice when it came to the Sunshine Coast in the late ‘90’s and was instrumental in introducing the program at local schools. Sue was the secretary for Community Policing for several years. Gaining a Bachelors Degree in Ministerial and Holistic Counselling at the University of Sedona, she obtained her Master’s as an IMM Metaphysician in 2006. Sue is currently an Officiant and Life Passages Celebrant on the Sunshine Coast.

Sue is an international author on Amazon, as well as a Goodreads author. Sue has 3 grown children and 5 grandchildren residing on the Sunshine Coast, with 3 attending local schools. Sue has been involved in many community projects over the years and always offers her services to the people of the Sunshine Coast.

Sue was first elected to the board in 2018 and re-elected in 2022 for her second four year term. 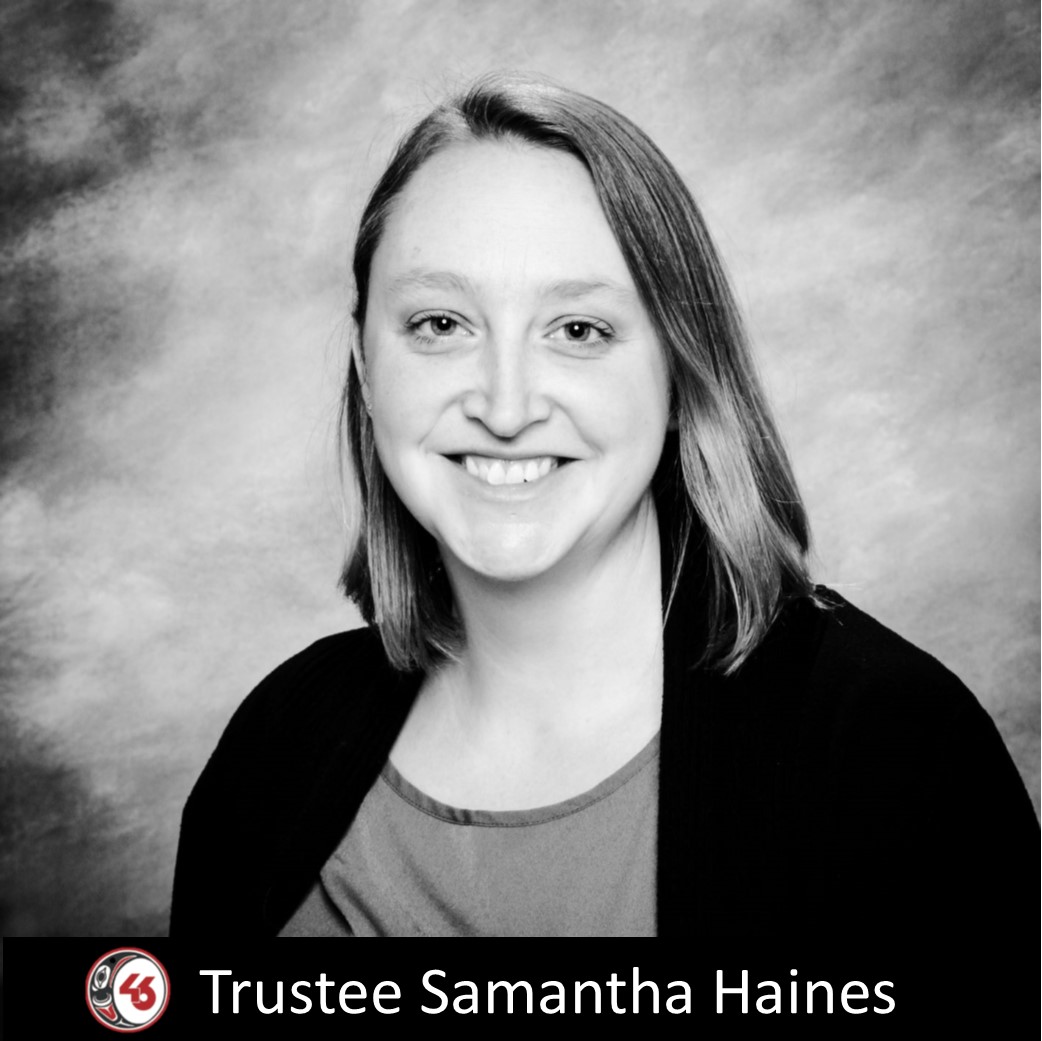 Samantha Haines has lived on the Sunshine Coast since 2006, spending most of her time in Pender Harbour. Together, with her husband, they are raising their 2 children. She is a Registered Veterinary Technologist with a passion for teaching. She enjoys photography, the outdoors, sewing and crafting. She is excited for the opportunity to continue to advocate and support the families and students of the Sunshine Coast. “I believe in the power of education to build and create communities where families not only live but thrive, and I believe that all students deserve a quality education where they can feel safe and supported so they can succeed.”

Samantha was first elected to the board in 2018 and re-elected in 2022 for her second four year term. 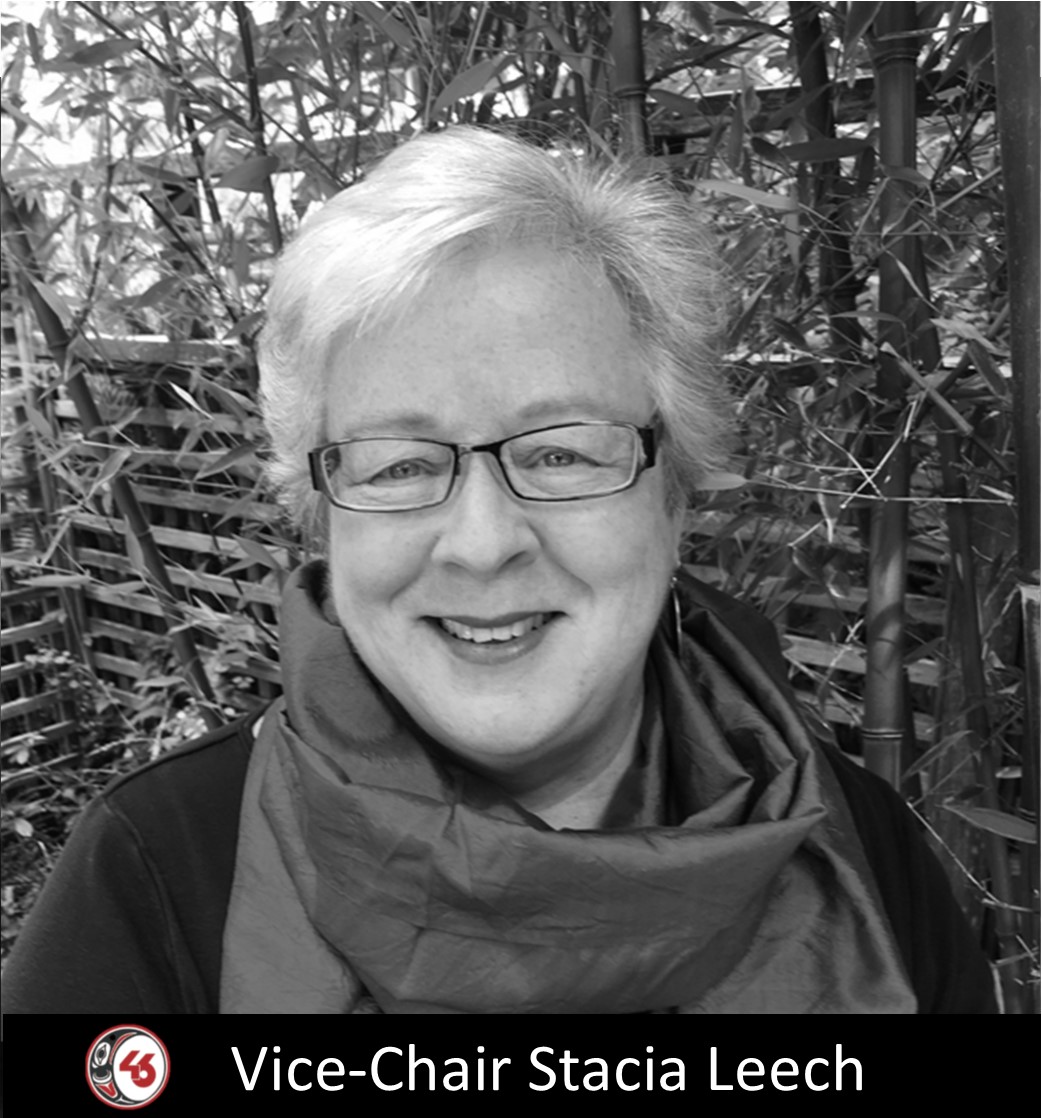 Trustee Leech has lived on the Sunshine Coast since 1980. She recently retired from the Roberts Creek Community School Society where for the past twenty years she was the Executive Director of the Society. For the past twelve years her work was focused on research, development and implementation of school based social and emotional programs.

As the Director of the Health Canada funded ‘Mind the Gap’ project she was responsible for all aspects of an initiative to deliver and evaluate social emotional interventions in the student, teacher and parent community of School District 46.

She is a certified Facilitator and had the privilege to act as Board Chair for many Sunshine Coast regional committees, initiatives and not for profit societies.

Since retiring from the Roberts Creek Community School Society, she has been working as an independent contractor; teaching eight-week, mindfulness based, stress reduction courses and conducting a province wide survey of student and teacher well-being. “We know that stress costs us all and has an impact on school and family life – surveys and research give us a greater understanding of the stresses inherent in the system? I feel that SD46 is well positioned to contribute to this provincial conversation”.

Trustee Leech is a supporter of the environmental literacy initiatives in our schools. And will be encouraging a regional approach to these initiatives.

She has two grandchildren who live in Gibsons; they will be in starting school soon and will joyfully keep her connected to the children and classroom teachers of School District 46. 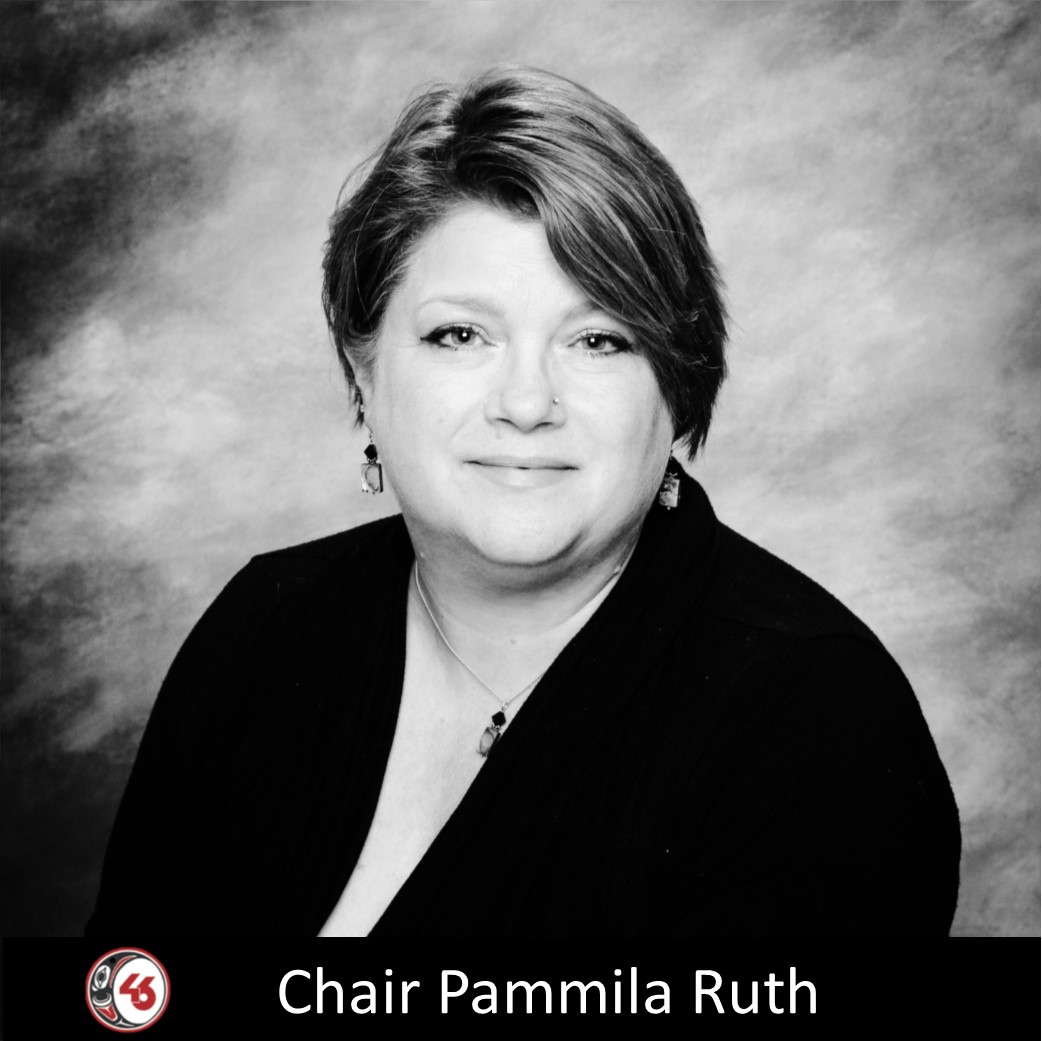 Pammila Ruth has lived on the Sunshine Coast since 1991 with her husband of 34+ years and raised their two boys, now grown and gone, in our public school system. She ran as a trustee in 2014 to ensure that all students were represented in our system. Inclusion and Equity are two of our district’s values that she holds near and dear to her heart. She took on the role of Vice-Chair of the Board in the last year of the 2014-2018 term and was voted in as Chair of the Board for the first two years of the 2018-2022 term. She is currently the BCPSEA (bargaining) Trustee Representative, as well as holding the role of Professional Learning Committee (provincial) Trustee Pro-D for the last 5 years. Student Voice is of the utmost importance to Trustee Ruth. Over the previous two terms, she has had the pleasure of working with nine Student Trustees and has watched them grow as leaders. “Effective governance in an organization focused on students requires that we listen to what those students have to say.”

Pammila was first elected to the board in 2014 and re-elected in 2022 for her third consecutive four-year term. 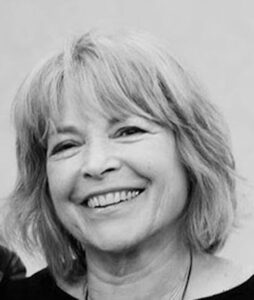 Ann Skelcher has lived, worked and played on the Sunshine Coast since 1981, when she came to work as a special education and classroom teacher at Gibsons Elementary. She later moved into the role of District Coordinator of Gifted and Enrichment Programs and then for the remainder of her 30-year career served as principal of Langdale, Roberts Creek, Kinnikinnick, and Halfmoon Bay Elementary Schools and as vice-principal of Chatelech Secondary School. Ann holds a Doctorate in Educational Leadership from Simon Fraser University and for the past five years, applied her leadership experience and knowledge in her work as an educational consultant supporting districts throughout North America. Ann served on the boards of Sunshine Coast Community Services and Educo Outdoor Adventure School. She currently also serves on the board of the Sunshine Coast Festival of the Written Arts. Ann and her partner raised their two children on the Sunshine Coast both of whom attended Roberts Creek Elementary and Chatelech Secondary. She is a proud grandma of five, three of whom are involved in post-secondary studies and one in high school. The youngest will soon be attending the school district’s Early Years programs.

Ann is honoured to have been elected to the board and excited to begin her first term in November 2022.

Do you have a question about School District 46 – Sunshine Coast or any of our schools/ programs and don’t know who to ask? Click the button below to submit your question and we will be in touch!