When I joined the District Student Leadership Team last year, I didn’t really know what I was applying for. All that I really knew was that it was an amazing opportunity, and that I would figure everything else out pretty quickly during the meetings. I’m currently weeks from finishing my second and final year on the team, and I feel as though I am only finally discovering its true purpose. 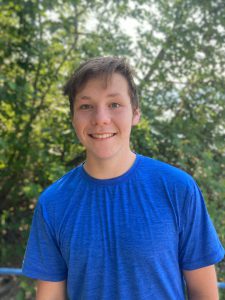 When I joined the District Student Leadership Team last year, I didn’t really know what I was applying for. All that I really knew was that it was an amazing opportunity, and that I would figure everything else out pretty quickly during the meetings. I’m currently weeks from finishing my second and final year on the team, and I feel as though I am only finally discovering its true purpose.

Encapsulating the voice of every student in School District 46 is a very exciting task, but it is also extremely daunting. Over the past two years, our chief resource for gathering said voices was through surveys. We created our own survey each year, as well as read the results of the YDI and the MDI. When we started to consider ways to enact the changes that the students were calling for we realized that the district already had many of those exact resources. Many students simply didn’t know about them.

When we created our survey this year, we had the intent to develop a focus based on what the students wanted. The students would choose a general area that they believed could use some improvement, and then would give a few ideas about how we could make those improvements. The results mostly placed an emphasis on mental health, a subject that was already being given attention across the district due the repercussions of the COVID 19 pandemic. A close second was the topic of sustainability.

When students go out of their way to do something, it is either because they are telling themselves to do it, or someone else is. When students graduate from school, what is to say that they are going to continue to “be green”? Who is going to tell them to properly recycle, or compost, or to bike to work? Schools can tell them while they are young, but when they grow up, they’ll have to start telling themselves. This is why I had a particular interest in environmental education. Instead of just learning to fear our growing global climate problem, they should instead learn to understand how it is working. They should recognize their individual roles in the future of our fight against climate change, as well as the role of our society.

I feel like I finally know what I need to do in this district, and now I am graduating in less than three weeks. Isn’t it silly how that happens? So, what is it that I leave behind? I leave behind a plan.

I believe that the role of the DSLT is to be a bridge. A bridge between schools so that we can highlight each school’s greatest accomplishment, and find ways to share them around the district. A bridge between the students and the board of trustees that discusses how to best empower students, and what resources could best support students. The thing about bridges is that they go two ways. I believe that the DSLT should also have constant communication with their high schools relaying what is happening at the district level, so that they know that their voices are being heard. All of the best conversations have both parties talking and responding!

Through being on the DSLT and working on the board of trustees, I have gained such a greater appreciation and understanding of education. Despite the certain… craziness of the past two years, I recognize just how much I have learned that extends past the binomial theorem. I have learned about organization, the importance of the first eighteen years of one’s life, and the possibilities of future generations as long as you give them the power to grow. I will forever be grateful for the time that I have spent in School District 46. I have received nothing but support, and I will frankly really miss being with you all. I sincerely hope that you have a super, great, awesome, fantastic day!

Do you have a question about School District 46 or any of our schools/ programs and don’t know who to ask? Click the button below to submit your question and we will be in touch!